If there’s one thing on an airplane that pilots really want to work when they need it to work, it’s their deice system!

While there are several deice systems used on General Aviation aircraft today, the pneumatic boot system is easily the most prevalent. The concept of inflating rubber boots to break off accumulating ice on the leading edge of the wings, propeller, and tail of an airplane came of age in the 1930’s. By World War II, it was the standard. For example, the G-21 Grumman Goose was offered with a deice system in 1937, as were Douglass and Lockheed offerings. It’s still the go-to technology for modern day aircraft. 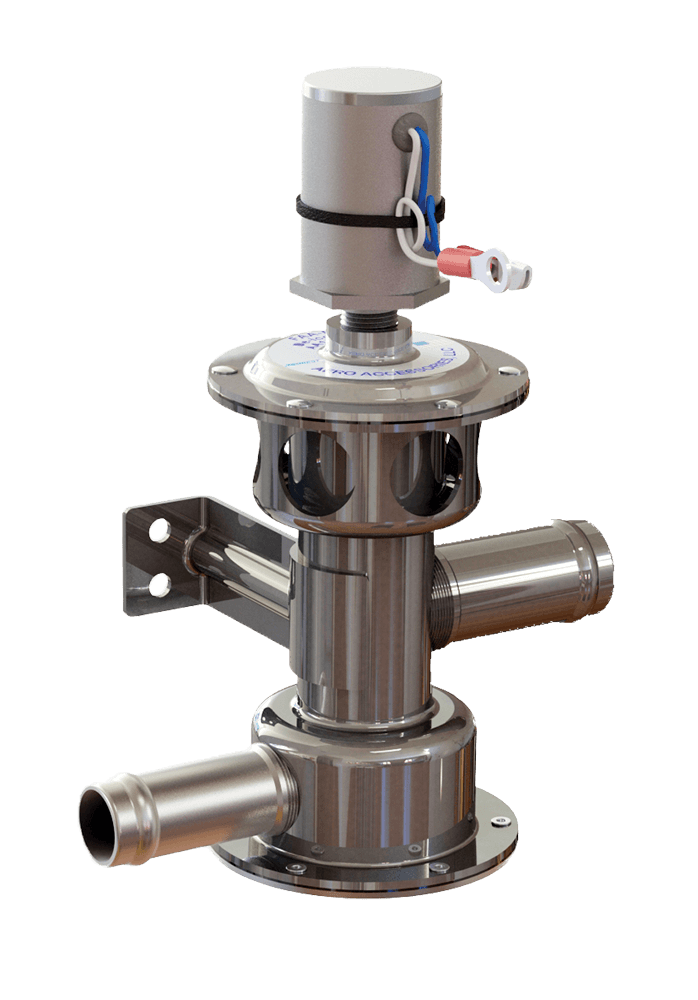 Here’s how the system works: 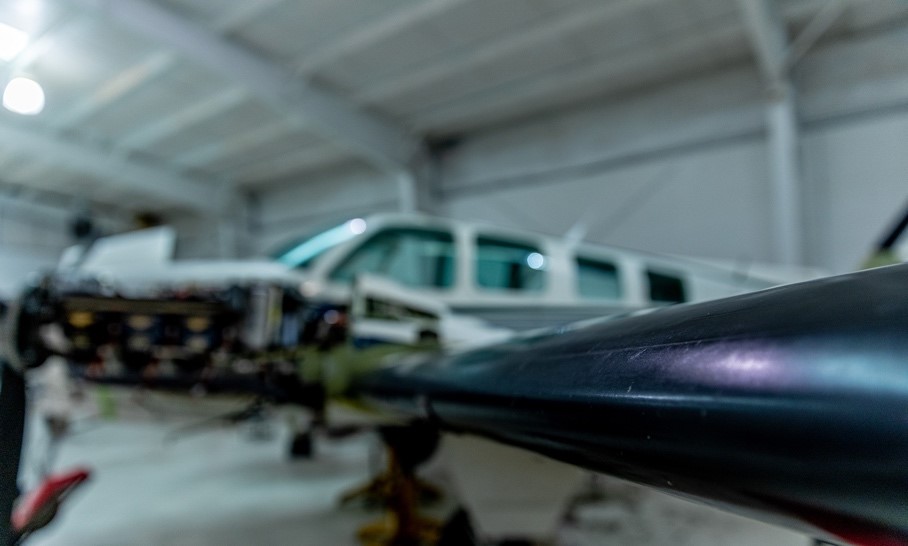 Figure 2 – inflated boot
When ice begins to accumulate on the wing, the pilot will activate the boots. Air is then pumped into the flattened tubes causing them to inflate (Figure 2).
When the boots are inflated, the brittle ice that has collected on them breaks apart and is blown away by the airstream. The boots deflate and flatten once the pilot stops activating them and the cycle is repeated as often as the pilot deems necessary.

Seems pretty simple, right? Well, it’s actually quite complex and a lot has to happen between the pilot flipping that switch and the boots inflating!

The deice system is comprised of a complex series of pumps, switches, timers, regulators, valves, and of course, the boots!
The airplane outfitted with a deice system is typically equipped with at least one, but probably two, engine-driven air pumps that provide pressure or vacuum to help inflate the deice boots (Figure 3). 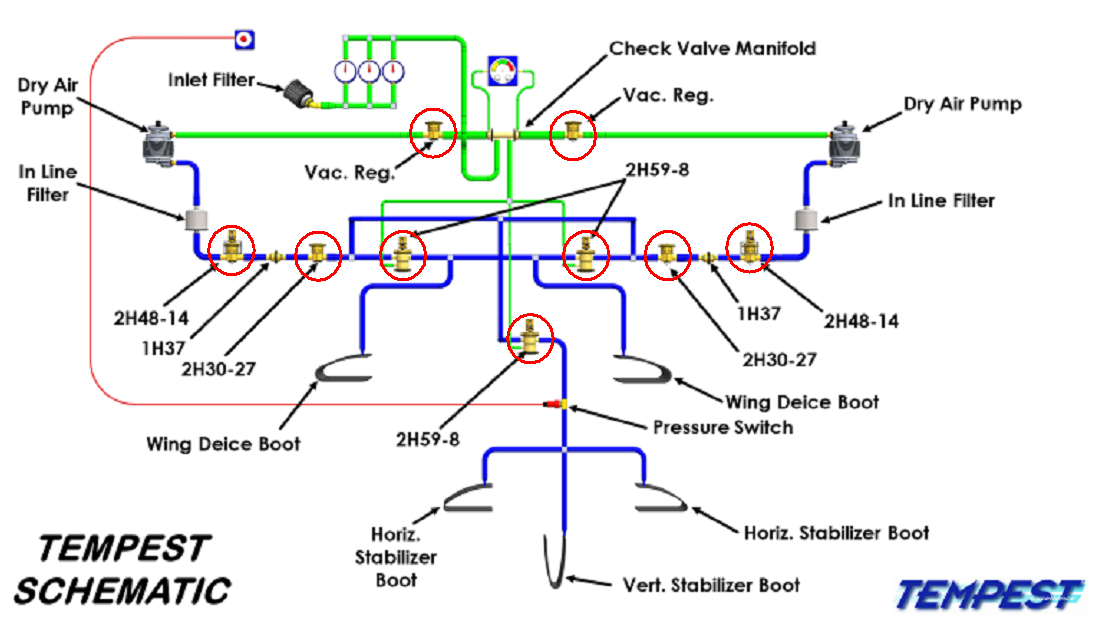 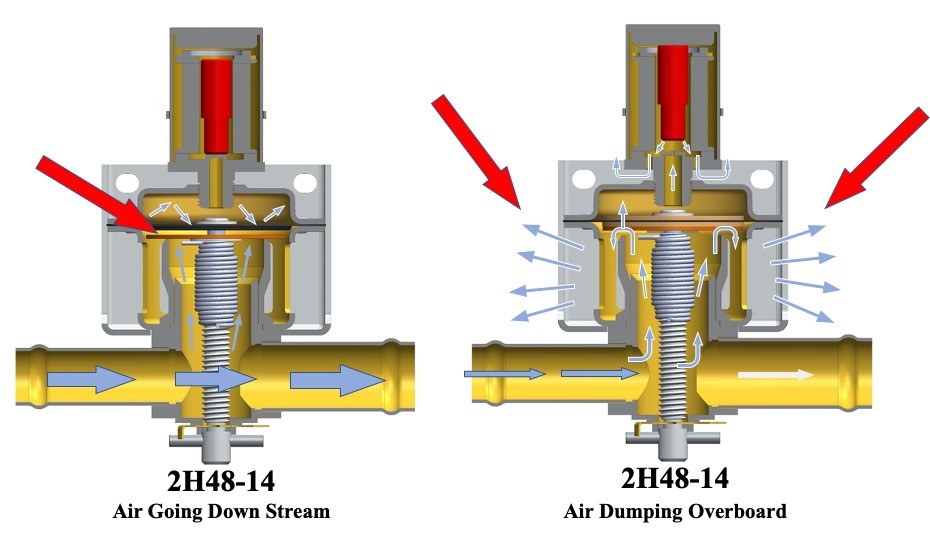 Figures 4 & 5 – showing valves dumping air pressure overboard
Downstream of the pumps, pressure regulators control the pressure within the pneumatic system at a pressure level that’s ideal for uses such as instruments, door seals, etc. This is considered “normal” pressure and occurs when the deice boots are not being activated.

However, when the system is activated it creates high pressure that’s required for boot operation. This is all controlled by an electro-pneumatic control valve, basically the “deice on or off switch”. When the pilot flips the deice switch on, the control valve boosts the pressure in the system high enough to efficiently inflate the boots – about 15-18 psi normally.

When the boots are off, this same valve simply dumps all or most of the air pump’s pressure output overboard (Figures 4 and 5).

Downstream, towards the boots, is another regulator. It controls the maximum pressure that can be built up within the system. When pressure in the boots approaches 15 – 18 psi, this relief valve opens. It dumps excessive pump output overboard, thereby preventing the pumps and boots from being damaged by overpressure.

A timer turns the boot on (inflates them) for about six seconds, then deflates them for about a minute. This time cycle prevents overheating the pumps and gives ice time to accumulate to a thickness that is brittle and will break and be blown away the next time the boots inflate.

In most twin-engine airplanes, and some singles, two air pumps are used and isolated from one another so that if one pump becomes inoperative – or an engine is feathered on a twin, rendering that pump inoperable – the remaining pump can still operate the deice system. Special isolator valves (Figure 6) in the system provide this critical function and, more often than not, aren’t serviced or replaced as frequently as they should be to ensure proper performance. 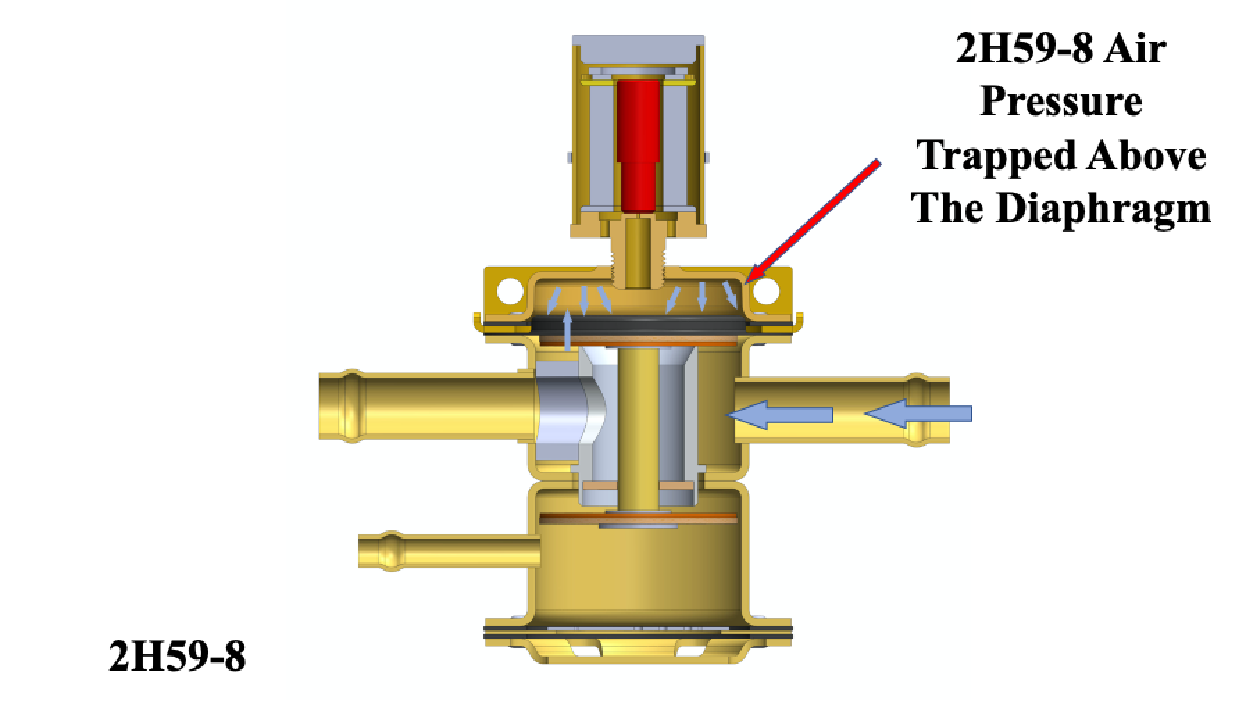 Figure 7 – vacuum inducer
In some aircraft with sensitive airfoils, it’s important that when the boots deflate that they lay very flat against the flight surfaces, otherwise the airflow may be disrupted enough to detract from the airplane’s climb, single engine performance, and cruise speed.

While the timer seems pretty straight-forward, it often has to do a bit more than simply run for six seconds “on” and one minute “off”. In some aircraft, de-icing is done on different areas in sequence, rather than all at once. Pressure sensing switches in the system tell the timer that one segment of the boots have reached the right pressure for inflation. Then the timer knows it can deflate those and inflate the next section of the system.

Sometimes these switches illuminate an annunciator light on the instrument panel that informs the pilot that the boots on the tail of the airplane have attained working pressure and are staying inflated for the correct period of time. Switches are another layer of detail and complexity, but that’s an entirely different subject for another time!

That’s the basic system in a nutshell. It’s actually even more complex than described here, but that’s the gist.

Unfortunately, many pilots and aircraft owners generally ignore these lesser known, yet equally critical, components of the deice system. Most of these components are just there and, generally, work as they should when they’re asked. However, many of the planes equipped with these valves, for instance, are 30, 40, or more years old and are often still using the original components that were installed at the factory. The valves, solenoids, rubber diaphragms, gaskets, and seals in the valves and regulators age like many other aircraft components and can become stiff or brittle and sometimes crack. This can lead to becoming functionally defective, largely ineffective, or inoperable. When you need them, they may try to work, but simply can’t get the job done as intended.

Mechanics should check the functionality of the deice system during regular inspections and each time they have access to the airplane and are running it up. From a maintenance perspective, prevention of these problems is as important, if not more so, than correcting a problem that’s already occurred.
There are many airplanes for which the deice system is part of a minimum equipment list but have been through many annuals without the component parts of the deice system being inspected, overhauled, or replaced with new components.

Manufacturers of these critical components, such as Aero Accessories, the manufacturer of Tempest brand products, advises that these valves, regulators, and other deice control components be repaired whenever necessary and replaced or overhauled at least every 10 years. Many operators and pilots are not aware of the necessity of periodic valve replacement or overhaul to maintain the aircraft in airworthy condition.

Aero Accessories has been building new and overhauled Tempest valves, regulators, and manifolds for decades. Like most Tempest products engineered, built, and manufactured by Aero Accessories, they include improvements in materials and design that legacy and competitive brands simply don’t offer. With the most expansive portfolio of readily available components, some of the fastest overhaul lead- times in the industry and an ever expanding line of new valves, many of which exceed their predecessors’ technologically and rival their overhauled counterparts in pricing, Tempest valves, regulators, and manifolds are as reliable as they are affordable. For full applicability or to purchase a new or overhauled deice valve, please visit the link below.

And remember, diligent inspection, maintenance, and overhaul/replacement of these critical components will help ensure that your deice system performs as needed, when needed.